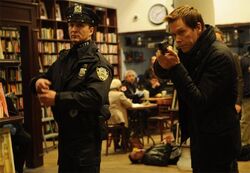 Unmasked is the ninth episode in Season 2, and overall the twenty-fourth produced episode of The Following. It first aired in the United States on March 17, 2014 on FOX.

Retrieved from "https://thefollowing.fandom.com/wiki/Unmasked?oldid=11958"
Community content is available under CC-BY-SA unless otherwise noted.