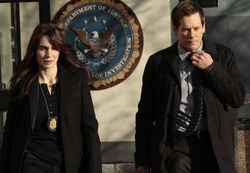 "Love Hurts" is the ninth episode of Season 1, and overall the ninth produced hour of The Following. It first aired on March 18, 2013.

With Weston still in the hospital, Ryan and Parker attempt to outsmart their new leader Nick as a way to continue their search. In a surprising move, Joe reaches out to Ryan to demand Claire’s location and reveals that he will go to great lengths to lure her out of FBI custody. Meanwhile, followers from the past make a shocking return.

Joe speaks to his followers and wants them to tell him their ideas for their own chapter. A young woman who is nervous talks to Joe first. She is then revealed to have killed her husband and his mistress, before dumping the bodies. She says she wants her chapter to have a happy ending. She then goes to a diner with Louise and talks to two women, before shooting one of them in the stomach with a spear gun. She then tells the other woman to tell Ryan "Love Hurts". The woman who was killed's name is revealed to be Claire Matthews. Amanda then kills another Claire Matthews. She goes after a college student named Claire Matthews, who is at a festival. Louise and Amanda both go there. Amanda chases Claire into an abandoned building, while Ryan catches Louise. He tells her to put down her gun or he'll shut and she says "I don't think you have the...." and is shot and killed. Amanda is later taken into custody and College Claire is ok.

Jacob and Paul go to Jacob's family's vacation home, where Jacob's mother soon arrives to avoid being hounded by the press. She tries to treat Paul's injuries, but reveals that he has sepsis and will die unless taken to hospital. Jacob mercy-kills him by smothering him with a pillow. Roderick reveals to Emma he knows everything. Jacob and Emma are reunited.

1 of 7
Add photo
Retrieved from "https://thefollowing.fandom.com/wiki/Love_Hurts?oldid=11524"
Community content is available under CC-BY-SA unless otherwise noted.