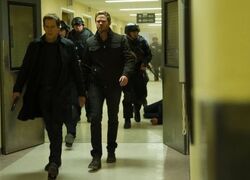 Freedom is the eleventh episode of Season 2, and overall the twenty-sixth produced episode of The Following.  It first aired in the United States on March 31, 2014 on FOX.

A deadly massacre, thought to be sparked by Joe Carroll, leads Ryan and Mike into very dangerous territory. But as more details are revealed, they realize another leader might be on the rise. Meanwhile, Joe continues to train the Korban cult and confirms his new plans with Emma and those who doubt him.

Retrieved from "https://thefollowing.fandom.com/wiki/Freedom?oldid=10434"
Community content is available under CC-BY-SA unless otherwise noted.